So wifey and I were watching an episode of Fear Factor Sunday night when we noticed that the contestants were wearing both the ContourRoam and the GoPro cameras. These are the exact cameras I have been researching extensively for weeks. Both have their pros and cons regarding size, battery life, and video\picture quality.
Anyways, back to Fear Factor. There was a challenge which involved the male contestants being tied to a windmill arm that was spinning. At the bottom section of the windmill arm's path was a pool of water in which the contestant's head was completely submerged for a couple seconds. Immediately as their head surfaced, their team mate would shove a rotten bull testicle into their mouth so that he can attempt to spit the rotten testicle back into a glass bucket on the down swing of the windmill arm on the opposite side. I know what you are thinking, "WTF Jonny Rando? Is this possible"? I can assure you that it is. 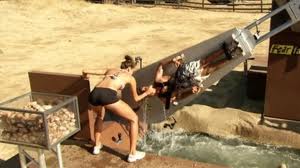 Copyright 2012 NBC - Fear Factor, Episode: "The Bees Are So Angry"
The cameras did appear to take quite a beating throughout the episode, but remained functional and the bull balls looked pretty clear in 1080 using a GoPro. I don't plan on catching any bull balls myself while doing rando rides, but I would expect heavy down pours will riding and wanting to get some photos.
So hopefully this week I can finish making up my mind on which camera to get.
Posted by Jonny Rando at 11:40 AM