It was once again time for another Ohio Randonneur brevet. This ride be 200k in distance and in the form of a large circle route starting in Grove City and then proceeding to Circleville and Mechanicsburg. By 'Biking Bob' standards, this is a relatively flat course. The forecast of the day was: starting temp of 40, a high of 52-55, winds @ 20-25 from the South West and a 40% chance of a thunderstorm. Knowing that we had a long drive ahead of us, my riding partner Rich slept over Friday night. We agreed that a 3:30 wake up call would be necessary so that we could arrive with ample time to get our gear ready. Good thing! A bridge on our way down was closed and required a detour.


There was a fairly large showing for the brevet considering the forecast and the temps. Everything from standard touring bikes, to race bikes, tandems, recumbents and even an old style beach comber bike. Bob was giving us the route break down and waited until it was exactly 7:00 on the dot so that we could start (there may have been some grumbling in the ranks due to the temp and wind chill to perhaps start early). Bob never deviates from the rules! 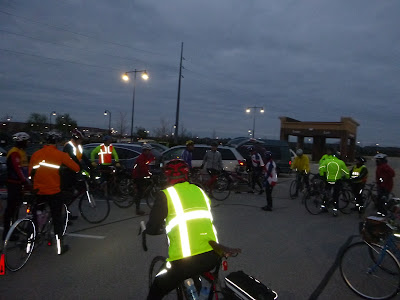 Here's my main riding partner Rich. He was still waking up and attempting to stay warm. 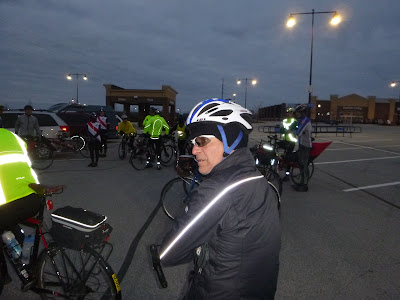 As noted previously on this blog, I suffer from tailor bunions. I decided to take a chance hoping that the forecasted high was actually going to happen and wore my keen sandals with a light weight pair of wool socks.  Keen sandals are basically the only cycling shoes that I can comfortably wear now. Anyone looking for a comfortable pair of cycling shoes that are very easy to walk around in, need to give these a good look.


Here's what most of the day looked like - pace lines so that riders could draft. 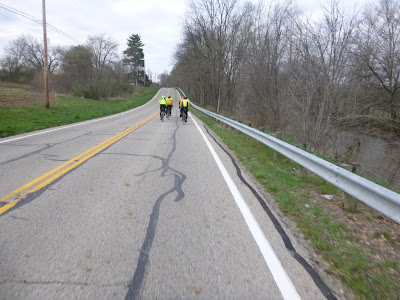 Around 10:30, the wind had continued to pick up and we were hitting it dead on with little to no break from it. The temp never got above 45 all day. My feet were going really numb from the cold wind chill temps. Thankfully, I had packed a pair of booties. After putting the booties on, my feet  were warm within 15 minutes. By this time, the riders had split up far enough that everyone had settled into their groups. I was again riding with my typical tried and true partners: Rich and Jonathan.


In this picture, Rich was sure he saw a big foot in the tree line and jumped off his bike for further inspection. 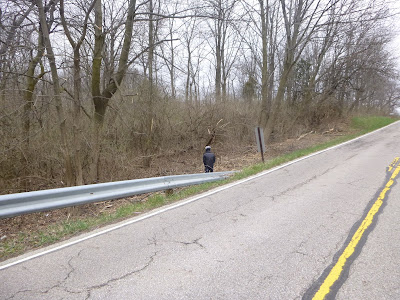 Jonathan was tweaking his gear while we were waiting for Rich to complete his big foot investigation. 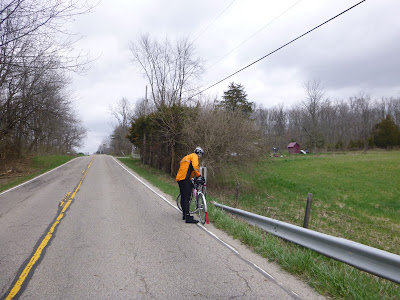 Dave (American Randonneur of the year - 2008), Toshi and Makoto taking leads in the head wind. 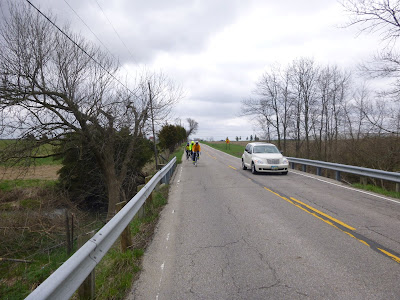 Bob talking to Toshi and Dave about how his rear derailleur cable broke and managed to tie it up well enough to get three gears back. 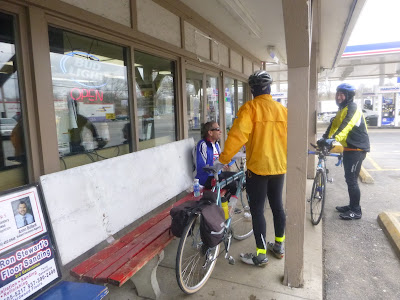 Rich trying to stay warm and Jonathan in the back ground trying to hide while inhaling a bologna sandwich. 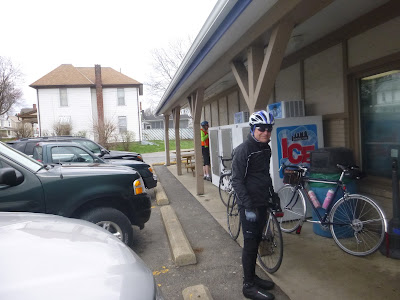 Our group of three finished just shy of nine hours and thirty minutes. Not fast, not slow. Most importantly, we all stayed together. It's more important for us to have the camaraderie vs. finishing a little faster on our own.

I'll be the first to admit that my pictures suck. It was my first time using the new camera and I def. had the distances way off. Things looked much larger in the LCD screen compared to when viewing the photos on a computer. Also, it was cold enough I didn't feel comfortable taking to many photos while riding with gloves on and shaking. There's always next tim e (two weeks in PA)…..

Where's the sole photo of me? Wifey said it was horrible and not to post it……. take it up with her.