Yesterday was my first inaugural ride of the Uniontown to Creston 116k Populaire ride. The ride has 3,500 feet of climbing. While not excessively hilly, those that are on the route are challenging and long (there are some over a mile long). The route traverses through the City of Green, Canal Fulton, New Franklin, Doylestown, and Rittman to the turnaround control in Creston. The temp was in the upper 60s with 20-25 MPH sustained wind and gusts up to 35-40; perfect riding weather for randonneurs.

After getting about five miles out, I quickly realized that the wind was going to make the ride a slow one. I was riding near threshold and making slow times between controls. You know it’s windy when pedaling downhill hard and not breaking 17 MPH. There were very few riders out yesterday despite the warm weather. At the turn around control in Creston, I quickly ate a 6” chicken sub and drank some orange juice. 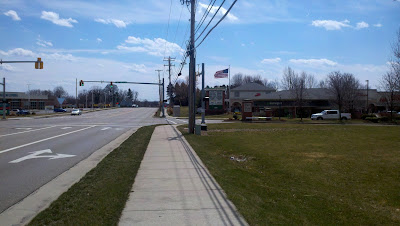 The return ride was so much more pleasant since I could ride in an aerobic heart rate zone while maintaining 23 MPH + avg while the wind was at my back for some of the sections. While leaving Canal Fulton I turned back into the cross wind and started to notice a heavy breathing. After realizing it wasn’t me, I looked to my right and realized there was a dog the size of a Saint Bernard running next to me. Thankfully the dog was quite friendly and not trying to take a limb home, but still scared the bejesus out of me.

I thought I could make it back to the final control before the temps dropped too much, but with 8 miles left I decided to put some socks and arm warmers on. Once the sun was hidden behind the clouds, the temp was dropping rapidly. Keen sandals are grand in warm weather, not so much below the low 50s. Overall, I had a fun time despite the excessive wind. Next time I’ll try to sucker Rich into tagging along.